The classes in both sections of the program are in depth and teach kids how to bicycle safely on city streets.

Duties:
Required Qualifications
Preferred Qualifications:
HOURS:
This is a part time, limited term, hourly position with no benefits. All necessary training will be paid. COMPENSATION: $10 per hour.

DEADLINE:
Applications must be received by March 6th, 2009. The Bicycle Federation of Wisconsin (BFW) is an equal opportunity employer and a registered 501(c)3 non-profit organization whose mission is "To make Wisconsin a better place to bicycle!". We are a growing non-profit that is growing to get more people biking.

For more information on the program, visit www.bfw.org. 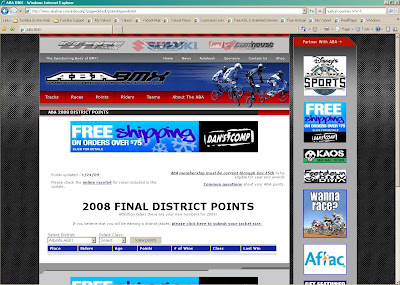 Milwaukee BMX Riders, please click the image below to go to the final 2008 district points standings at www.ABABMX.com Please note that the position you are listed in is your district number for 2009. Congratulations to all Wisconsin 01 District #1 Plate Earners!

The ABA is experiencing steady growth in membership and will continue growing and building upon the great success of BMX racing`s 2008 Olympic debut. The ABA and NBC Universal Sports will deliver over 20 hours of programming per year for the next four years to an ever growing NBC Universal Sports audience of over 40 million homes. With BMX emerging as the newest Olympic action sport in 2008, and with the American’s claiming three of the first six BMX Olympic medals ever awarded, the ABA is poised for tremendous growth leading up to the 2012 Olympics in London.

“It has been a pleasure to work with BA and the rest of the ABA staff on the organization and execution of the 2009 UCI event calendar,” said Steve Johnson, CEO of USA Cycling. “These events represent the top level of international BMX racing in America and are a critical link in our athlete development pipeline. USA Cycling is very pleased to be involved with such a progressive organization to bring international-level BMX racing to the United States.

The ABA has been dedicated to the sport of BMX racing for more than 32 years, and has a clear vision of the future. With this type of exposure for BMX racing in America, I’m confident that the ABA will continue to assist in the development of world-class athletes who eventually represent the United States in international competition around the globe.”

"We are very excited to expose the sport of BMX racing to NBC Universal`s 40 million homes, this agreement will continue to fuel the growth we have experienced since Beijing,” said B.A. Anderson, American Bicycle Association’s Chief Executive Officer. “The ABA has dedicated over 32 years to BMX racing and now that we are an Olympic sport we have a responsibility to our members and the country to make sure that our athletes are the best in the world,” Anderson added.

The ABA is also pleased announce that Hyper Bicycles has signed on as Title Sponsor of the first UCI Continental event to take place this weekend in Guthrie, OK. “Exposure is key for growing our sport,” said Clay Goldsmid, owner of Hyper Bicycles. "Getting the thrills and spills of BMX racing into the living rooms of America is a very exciting prospect. We think this could be a monumental step for the future of BMX. We’re excited to have this opportunity to team-up with the ABA and NBC Universal Sports to be a part of it,” Goldsmid continued.

“On the heels of such an amazing debut for BMX Racing in the 2008 Olympic Games, I am so grateful that ABA BMX, along with NBC, will be allowing many more kids and parents to witness what an all-around great sport BMX Racing is,” stated Hyper Bicycles 2008 Olympic Bronze Medalist Donny Robinson. “As a racer, what more can I ask for than a four year televised series? This is unprecedented in BMX Racing and will allow the public to be involved and follow all the pressure-filled qualifications leading up to the London 2012 Games.”

With all the quality racing we had in 2008, it wasn't hard to come by a bunch of good photos ... and, we've got a good stash of them that haven't yet been published. We'll try to keep 'em coming during these long, cold months of winter.

Easily one of my favorite shots of the entire season -- but, the snapshot quality of my Kodak digital camera never quite seemed to do it justice. If I was a photographer worth my salt, I would pack a digital SLR so I could create a very narrow depth of field, drop the shutter speed and pan like my life depended on it to keep up with speedy Jared Engelhart in this image. Jared's full Troy Lee uniform tinted goggles and very clean bike make him look absolutely pro ... good stuff. 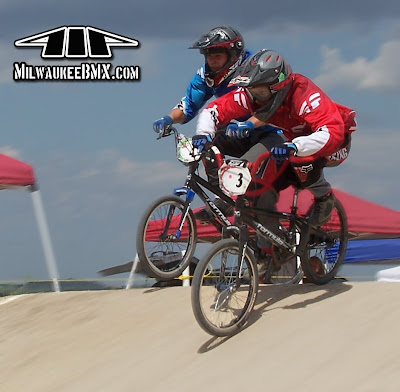 Colin Kohls and Brad Olson, elbows up and tradin' paint. A BMX moment to remember for these two ... who are good buds on and off the track. 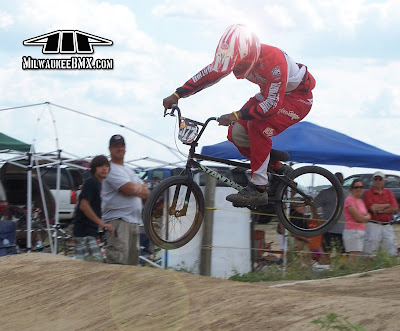 Yeah, it was good to see Olajuwan Davis at our State Championship Qualifier race ... as you can see here ... dude was killing it ... and when I say he had the first straight dialed beyond belief ... I mean it. He was pretty consistently tapping the brakes down into the first corner as he was carrying so much speed.

Wisconsin Gov. Jim Doyle today announced that Madison has been selected as the cycling hub for Chicago's bid to host the 2016 Summer Olympic Games. "Not only is Madison a great place to live, it's the nation's premier area for bike riding," Doyle said. "I am pleased that the Chicago 2016 Committee has chosen Madison to be its cycling hub and can't wait for people from around the world to discover our beautiful region."

Chicago 2016 has consistently placed athletes at the center of our Games plan," said Patrick Ryan, chairman and chief executive officer of Chicago 2016. "Our constituents emphasized their desire for technical and challenging courses, and we believe that the natural terrain found in Madison will exceed their expectations and make for an ideal competitive environment."

To select an ideal venue, the bid committee worked collaboratively with cycling experts, Olympic athletes and the International Cycling Union (UCI) to select courses that are technically challenging and conducive to high-level competition.

The Wisconsin Road Cycling Course would begin on the campus of the University of Wisconsin at Madison, head east through downtown and feature several steep climbs near the finish line in Blue Mound State Park.

The Wisconsin Mountain Bike Circuit would take place in Tyrol Basin, a popular ski and snowboard destination in the winter that makes for a technically challenging course that meets the needs of the athletes while allowing for a great spectator experience during the Games. Madison has one of the most extensive bike trail systems in the United States.

Editor's Note: No mention of the Bicycle Motocross venue ... but, it's a safe bet that will also be proposed for the Madison area. In any event ... this is an exciting day for all of Wisconsin's cyclists to be sure !!!

Not that we want to spend much time talkin' politics here at Milwaukee BMX ... but recently passed consumer protection legislation impacts our sport in a negative way through the required CPSC test of every unique component a manufacturer produces (both finish and construction materials). This testing will potentially add significant end costs to participants in the sport of BMX.

The recently passed legislation lumps BMX bicycles in with items such as die-cast cars and other small toys (which were produced off-shore and shipped to the United States with unacceptable amounts of lead in their finishes) by designating all bicycles with 24" or smaller wheels (or, roughly 98% of all bikes you'll ever see at a BMX track) as "toys".

To that end, there is an online petition being circulated that will be presented to CPSC with the intent to modify the law and designate BMX racing bicycles as "sporting goods equipment" and therefore exempt them from the agency's costly testing processes.

We hope you will consider joining us in signing this petition.

I added the following note to my signature:

"With all due respect to CPSC's intent to protect the health and well being of our children through mandated testing of items designated as "toys" … we believe the legislation recently passed is too sweeping with regard to the current definition of all bicycles with 24” or smaller wheels considered “toys”. Added to the 2008 Olympic Games as a medal sport, the Bicycle Motocross event was contested by the finest cycling athletes on earth, competing on bicycles with 20” wheels. We hope you will find a means to delineate between bicycles intended for “competition” vs. those consumed by the general public. "

Thank you for your consideration and support in this important matter.

Holy Long Overdue Posts - Batman !!!
This might be the longest of long overdue posts in the history of MilwaukeeBMX.com. But, here are some great shots taken from over the summer and submitted about a month ago by Tina Gillis on behalf of photograher John Katner. 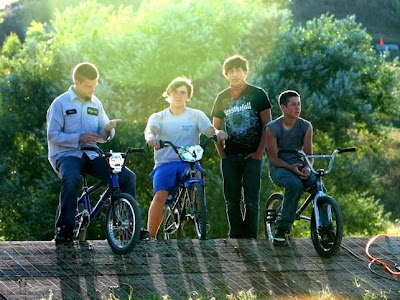 There's just something groovy about this late afternoon shot of Dan Blink, Brad Olson, Brennon Manske and an unidentified rider on the gate at Milwaukee BMX. I guess maybe it's because of the chill vibe these riders are giving off. Milwaukee's relaxed attitude is something you really begin to appreciate the more you travel around from track to track. 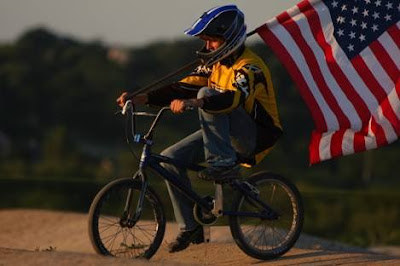 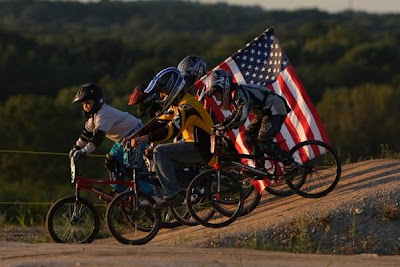 Kohls again, this time surrounded by Groms that all dream of someday having his speed, style and skills. 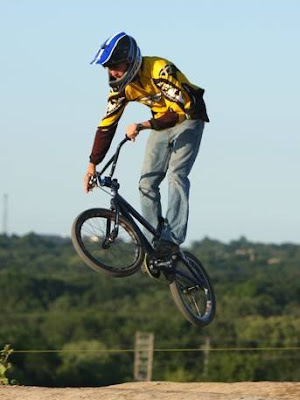 Going fast and getting just a bit tweaked ... if you ask Ben ... the sideways in this shot is probably about scrubbing speed. Yup, I'm jealous !!! 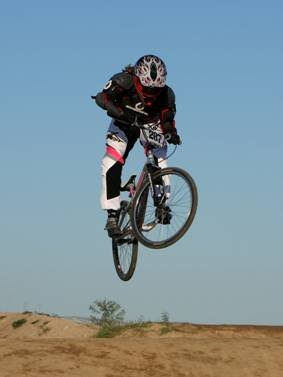 There aren't many gals lining up to hit up our track in the 36-40 women's cruiser class. Tina Gillis doesn't just gate up ... she gets out there and absolutely kills it. 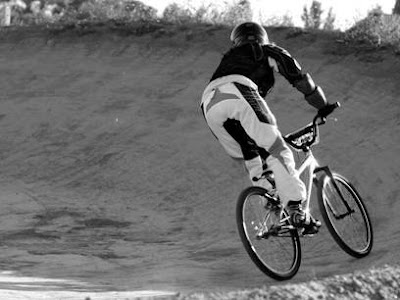 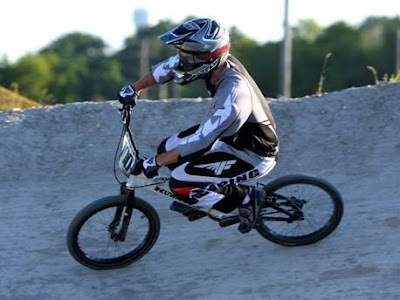 Peyton Dickerson, obviously on a practice lap and coasting through Milwaukee's second turn. 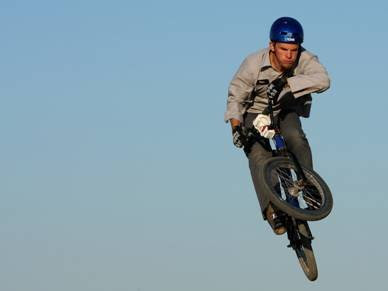 Dan Blink, at much altitude, little turn bar and seriously eyeing up his landing spot. Sitting in a flourescent lit office at 4:30 on a friday afternoon in Early January and realizing that it's nearly dark out already ... it's easy to float off into one of a million or more riding dreams while staring at this photo. 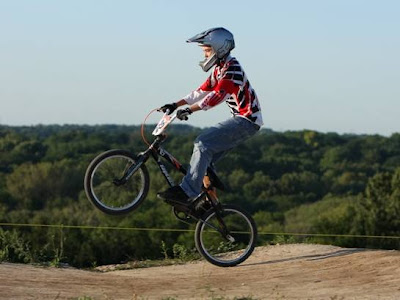 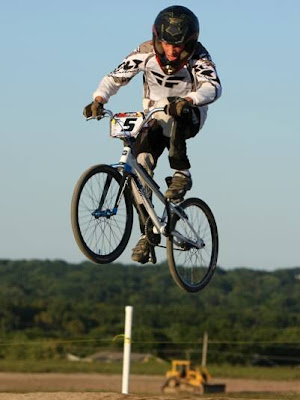 Jacob Hinzpeter has become such a dialed rider that I don't think anybody ... and I mean even me ... got a bad photograph of the kid all season long at Milwaukee. This shot is a metaphor, because, for this young guy, the sky is the limit in BMX. 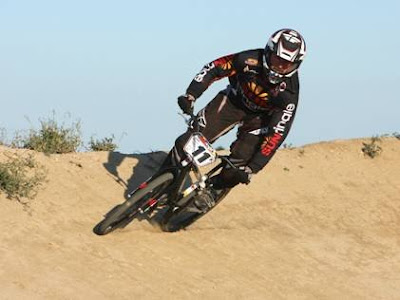 Who would believe that Bryan Dickerson "bumps up" to the 46-50 cruiser class in 2009? He's one of several riders at Milwaukee that were among the early pioneers in the sport ... and totally trashing conventional wisdoms about athletic output and aging. It's easy for me to remember the "old man" cruiser classes in the early 1980's ... Dads in their late 20's and early 30's who couldn't hold a candle to the type of riding that Dickerson is delivering each and every time he racks up today. Good on, ya, Bryan. 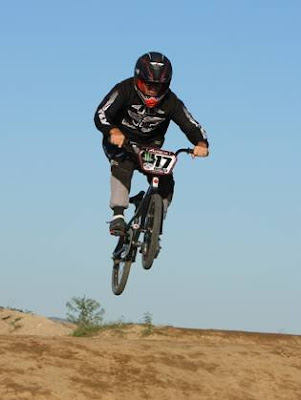 Yup, Chris Brotz got bit by the BMX bug real hard this summer. His riding continues to improve ... and his interest in the sport is about to carry him beyond competitor. Chris is going to be helping out more and more at Milwaukee BMX ... and we're super lucky to have him on board.