Word coming down from Milwaukee's most famous T/O, John Mittelstadt is that the indoor practice facility is under construction and we're looking to make a big push through the weekend to get that beast ramped up and dialed in. A couple of the straights are already roughed in compliments of Fond du Lac T/O Paul Weimer and a fearless crew of volunteers who punched in early Saturday morning and called it quits late Sunday afternoon. It's still top secret, so I don't have any photos yet, but, will after the weekend.
And, with that ...
We could use a few volunteers over the weekend to help dial this beastie in.
Please contact John Mittelstadt at 414-429-3485 if you can help this weekend. We'll be working most all day Saturday and Sunday.
___________________________
Mucho thank yous to our newest friends at Wheel and Sprocket who stepped up big time to help underwrite the practice facility. Making this move took some pretty serious huevos and somehow, our fearless leader, John Mittelstadt just keeps making things happen.
By the way ... this joint will be ready for business (we built it for you to ride, that's how it works) on NOVEMBER 11th ... so, circle that date on your calendar with a big fat red marker and we'll see you then. 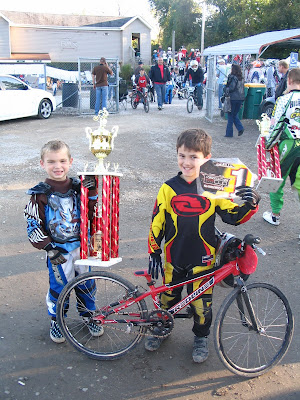 We received this picture from Steve Nelson, who sent this image from the Redline Cup Finals Central (yup, the make up race for the rainout - thanks a bunch, Hurrican Ike!) this past weekend in Missouri.
Steve writes:
"Connor Nelson (Big Cheese) won the 5 & Under Novice Friday night prerace. He was leading the Redline US open on Sat but crashed on the triples and took 7th. He won the rescheduled Redline Cup Championship event this past Sat Oct 25 beating the local favorite (Jammin) Jake Scronce.

Many other WI riders finished well. The state of Wisconsin was well represented.

Pictures attached of Connor getting his trophy and of him with Nathan Davids who won the 6expert class."
That's a pretty rad trophy Connor ... sounds like you guys had a super weekend !!!
Posted by Kevin O' at 5:27 PM No comments:

Here are a couple of images submitted by Randy Olson (Mr. FireMagic!) of the little cook out that we threw together on Saturday to show our appreciation for everyone who's participated at Milwaukee BMX througout the 2008 season.

This sequence of photos shows the FireMagic gas grill perched high in the bed of the deisel powered, outrageously raised white Ford Superduty crew cab -- right on through the brat and hot dog post race Milwaukee BMX fiesta. Yup, just like my on track experiences this season, I pretty much wound up at the back of the line, but still managed to score one of those super tasty brats. 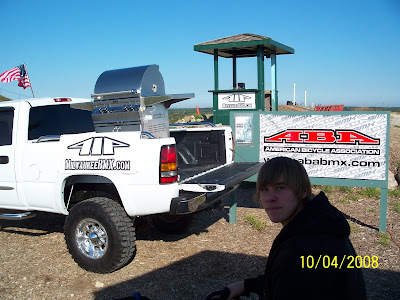 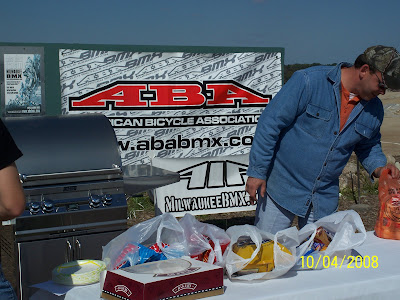 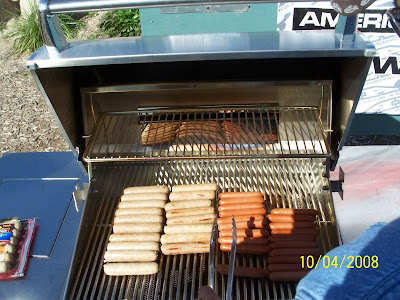 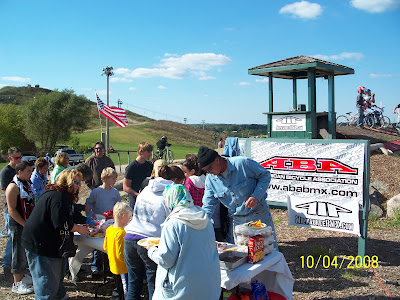 Wrapping it up With STYLE !!! 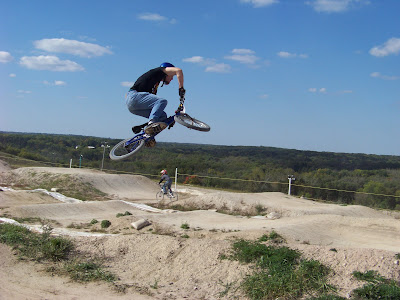 Dan Blink tests the limits of laying it over as he transitions from the first straight doubles into the last corner. 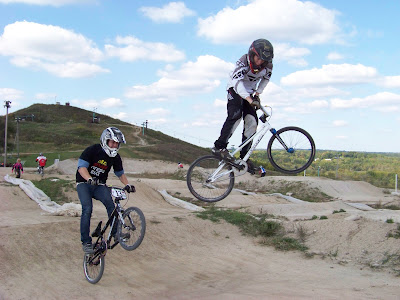 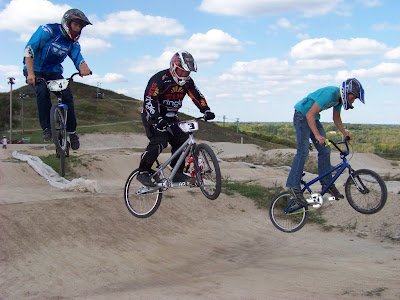 Curt Zizzo, the meat in this sandwich, is a few years on the plus side of the combined ages of Brad Olson (15) and Ben Kohls (17) ... but, don't tell him that.  I'm sure Curt would just be cool with me referring to him as -- The World's Oldest 17x.
We had a great day to wind things up ... I want to thank everyone who made the 2008 Milwaukee BMX season possible ... and, in the coming days, I'll be naming names.  For now -- we'll keep it to our Hot Shop Sponsors, Sun Ringle, Kuwahara, Milwaukee BMX Super Chef - Randy Olson, The American Bicycle Association, our AWESOME Volunteers, Craig over at PRO ELECTRIC, Ray Eckert and the fine folks at Waste Management, and especially all of you crazies who gated up with us throughout year and made the 2008 season the best yet for Milwaukee BMX.
Many More Pictures from our October 4th Race are HERE:
Thanks again !!!

Last Call
This Saturday will be the last call for racing in the 2008 season at Milwaukee BMX.
After racing, we're planning a cookout with brats, burgers and hot dogs on the menu. Grill Master Randy Olson will be handling the sacred Milwaukee BMX Golden Tongs ... Olson won the Fire Magic grill off at the Midwest Nationals earlier this season and scored himself a choice grilling setup worth in the neighborhood of $4,000 !!!
Please bring a dish to pass if you wish.
We also have had interest in holding pit bike races. What's a pit bike? Any bike with 16", or smaller, wheels that your kids like to mess around on back in the pits -- thus, the term, pit bikes. Kids and adults alike are invited ... but, you must be an ABA member to participate.
Registration and racing will all happen at the normal Saturday a.m. times: Pit bike races will be held either during intermission ... or, maybe after the mains ... we'll figure it out!
Signups: 9:30 - 11 a.m.
Racing: ASAP
News That's Sure to Heat Things Up !!!
The flow of ideas that get cooked up high in the hilltop headquarters of Milwaukee BMX is just remarkable (remember, we're the ones that brought you Milwaukee BMX in the first place!) ... and, we're going to have some BIG news to announce in the next couple of weeks. For now, the clue and the tease is that we might not be stuck parking our BMX bikes for the winter here in Milwaukee. Sound cool? Talk to us this weekend, e-mail us, or contact John Mittelstadt at 414-429-3485 -- of course, you can also keep checking www.MilwaukeeBMX.com for additional details.
Posted by Kevin O' at 3:37 PM 1 comment: