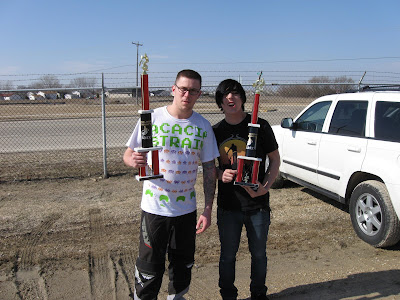 Still don't have it?

Need another? He's got dark hair and is in the photograph above.

And, that kid on the right (Dana Mittelstadt) might just be in the process of stepping up his game as well ... any intermediate win is a good one ... but, when you slug it out at a big Walworth Indoor race against a bunch of dudes who all want the same thing you do, and yet you come away with the prize ... that's a good feeling for sure.


PRACTICE MAKES PERFECT
Watch this for a segue --

The way these two got so fast is all the nights of laps and practice they put in at Milwaukee BMX. If you are ready to step up your game by putting the time in at the track ... contact John Mittelstadt [(414) 429-3585] about our new "SEASON PRACTICE PASS" -- available now for just $40 !!!

With 13 practice nights scheduled in '09 and more that could possibly be added, at a nightly cost of $5 -- that's a potential savings of $25 or more. Practice passes must be purchased by, or for, a valid ABA member.


WHEEL AND SPROCKET BIKE EXPO
Major thanks to Chris Kegal and the crazies over at Wheel and Sprocket for inviting Milwaukee BMX to be among the select clubs represented at their annual State Fair Park Bike Expo at the Exposition Center running from Thursday April 2nd - through Sunday April 5th. Although our primary reason for attending is to promote new rider recruitment for Milwaukee BMX -- we will be well represented at the Expo, with a couple of race bikes on display, schedules from area ABA tracks to hand out and plenty of video for the kids to check out. Come on out and say "hi" ... the event is free ... and we hope to see you there.

If anybody would like to volunteer to sit at our booth and answer questions about Milwaukee BMX and the sport of Bicycle Motocross in general ... we can probably find some time that weekend to get you involved. Please contact John Mittelstadt (414) 429-3485 (mjmittelstadt@yahoo.com) or I (lavacycles@sbcglobal.net) for more details.
Posted by Kevin O' at 4:47 PM 4 comments:

News that's almost too good to be true.

For every kid that's ever had their bike stolen ... and knows that sick to your stomach feeling of having your ride disappear ... here's one for the good guys at Good Times. Rick Moliterno is the shop's owner, former Pro Racer, and founder of the Standard Byke Company ... this is the kind of thing that will only add to his legend.


Comment on this story Print this story Email this storyBy Brian Krans, bkrans@qconline.com

DAVENPORT — Here's some advice: Don't steal a bike near the Goodtimes Superstore, especially if a pro BMX biker is watching."

I just look out for the kids, regardless," said Rick Moliterno, freestyle BMX legend and owner of Goodtimes and locally made Standard Byke Co. Looking out for the kids includes chasing down a bike thief 30 years his junior.

Sunday afternoon, 15-year-old Trae Edwards was in Mr. Moliterno's shop at 1601 W. Locust St., looking at new pedals for his pieced-together BMX bike. Unable to afford them, he went across the street to a Wendy"s restaurant to grab a sandwich with the few dollars he had. He left his bike unlocked outside the restaurant — a decision he later regretted.

"My girlfriend, Jessie (Smeltzer), saw him from upstairs and thought, ‘Man, he should have left (his bike) at Goodtimes," " Mr. Moliterno said. "A few minutes later, Jessie says, ‘Some kid"s stealing his bike."

"Mr. Moliterno immediately threw on some shoes and grabbed his bike, asking his girlfriend, "What does he look like, and where did he go?"

The thief, described as about 14 years old, had a two-block lead on Mr. Moliterno, 44. But Mr. Moliterno is no slouch on a bike. In the last 30 years he had became famous, first for cutting his teeth on BMX bike tracks and later performing tricks on the streets. "It was kind of funny because the kid just stole a bike across the street from the place bikes are sold and designed, right in front of a guy who makes them," he said.

Karma also stepped in for Mr. Moliterno: one of the pedals Mr. Edwards wanted to replace fell off, slowing the thief's getaway. Mr. Moliterno caught up to the assailant on 14th Street and said firmly, "Hey, I gotta have that bike now. I'm not going to turn you in, just hand it over."The thief complied and left, but not before Mr. Moliterno gave him a bit of advice: "Don't steal bikes, especially BMX bikes.

"Meanwhile, Ms. Smeltzer had picked up Mr. Edwards in a truck. By the time they caught up with Mr. Moliterno, he was towing Mr. Edwards" bike behind his own.

"Rick's a beast," Mr. Edwards said. Mr. Moliterno was just happy he could prevent one more kid from dealing with the heartbreak and anger of getting ripped off. "That feeling is sick," he said. "A lot of bikes get stolen. It's good to get at least one back."
Posted by Kevin O' at 12:49 PM No comments: